Votes for Women in Hyde Park

Posted at 09:33h in Blog by HBI Administrator 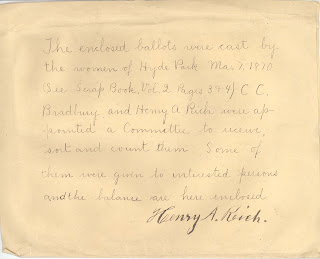 In honor of Women?s History Month, which is celebrated annually in March, we thought that we would share this fascinating look at a very early manifestation of the women?s suffrage movement that took place in Boston?s Hyde Park neighborhood.

It is worth working your way through the florid language of this nearly-contemporary description from 1888 of the events of March 7, 1870, to see how vivid a memory the writer had of 50-some women marching en masse down River Street in Hyde Park?which at that point was an independent town?to the polling place in the old town hall. While neighborhood lore has it that this was the first time women voted in an election in America, a helpful chronology produced by the Elizabeth Cady Stanton & Susan B. Anthony PapersProject notes that, beginning in 1868, women had voted in various places and in various kinds of elections on 21 other occasions before the Hyde Park women?s vote.

Whether first or not, this was a very early and significant event, and Hyde Park?s women continued to play an even wider role in the women?s suffrage and women?s rights movement. Several Hyde Park women such as Mehitable Sunderland and Angelina Grimke Weld?one of the famous ?Grimke Sisters??were very active in advancing social causes, from abolition to women?s rights.Most of the 50 women?s ballots cast in 1870 are preserved in the collection of the Hyde Park Historical Society at the Hyde Park Branch Library. HBI scanned and created digital copies of over 500 items from that collection during the summer of 2010, including the envelope that held the ballots that were cast, and one of the actual ballots, shown here. In addition, we made sure to scan several photos of prominent Hyde Parkers, including Ms. Sunderland and Ms. Grimke Weld. 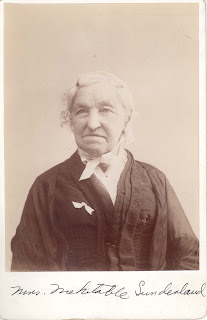 So?here?s to Women?s History Month, and here?s to the ladies of Hyde Park!

Excerpt from:  ?Memorial Sketch of Hyde Park, Mass., for the first twenty years of its corporate existence [1868-1888]? 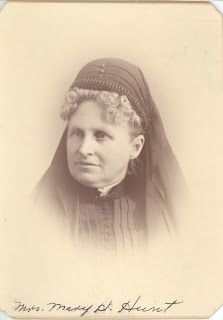 The year 1870 was quite prolific in notable events here. Then it was that another public demonstration was made in the dauntless attempt of some of its female citizens to storm the ballot-box and exercise the full powers of untrammeled suffrage, which carried the name and fame of Hyde Park into distant states and even beyond seas, and a failure to note which would render a sketch of the town’s history undeserving the toleration of the fairer and mightier part of its population. For some time previous to the March meeting, 1870, there had been signs and portents of approaching trouble, which took visible form and shape when a placard appeared addressed to the women of Hyde Park, inviting them to attend a caucus, to be held March 4th, to select candidates for the various town offices, the same to be supported by the women at the polls. The caucus was duly held and well attended ; stirring addresses were made inciting the auditors to stand by the position they had taken in the front rank of the woman-suffrage movement, to make up their ticket and back it at the polls.

Election Day fell that year upon March 8th, and proved to be a stormy one, snowy and blustering; yet some fifty ladies assembled in the Everett House parlors, whence they proposed to make their descent in a body upon the voting-place. At this place a large number of voters had congregated, much excitement prevailed, and it was feared that unmanly measures might be adopted. But when the occasion arises the man for the occasion is generally on hand.

He was here and in the right place. The moderator’s chair was occupied by Sylvanus Cobb, Jr., the well-known novelist, whose pen and voice were always ready to speed on reform, progress, and development, whose soul could not tolerate injustice or oppression. His attitude, aided much undoubtedly by that high esteem and love for him which has always characterized his fellow-citizens, produced a calm on the floor, and the ladies, without further molestation, advanced and deposited their ballots in a separate box, and at once left the room. The deed was done! The women had voted.