Posted at 15:30h in Blog by HBI Administrator 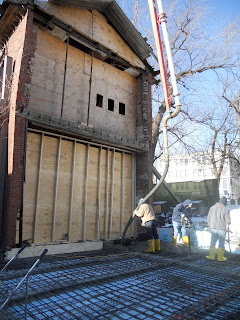 We in the history business often take the long view and, by nature, rarely pause to note the passage of another 12 month rotation. But let?s be honest: no one has quite the same thoughts on New Year?s Eve as on any other night of the year. It?s time to take stock and plan our year.

By now you know that HBI did well in 2010. Our five projects underway are valued at more than $6 million in development, and our pipeline is bursting with another $8 million in prospects and growing?. But there?s no rest for the weary, so we?ve set our sights on new resolutions for 2011:

1. To finish what we start. Our projects at the Harris Clapp Smith House, the Golden Building, and All Saints Ashmont in Dorchester will be completed this year. The Eustis Street Fire House in Roxbury won?t be considered complete until we move into it in June. And, while we hope to have stabilized the 1836 Alvah Kittredge House in Roxbury, the job there won?t be completed until the building is fully restored and activated for new uses.

2. To make Boston better. Certainly HBI?s new ?place? in Roxbury and a location closer to the neighborhoods we serve will make us better this year, but our work through the Historic Neighborhood Centers initiative will push harder on revitalization in Boston?s neighborhood commercial districts and drive transformative projects like the Roslindale MBTA Substation where HBI?s work can re-activate a landmark and expand the local economic base.

3. To expand our resources. To do all the projects we?d like over the next three to five years, HBI needs an equity pool of nearly $5 million. We will expand our investment fund this year through a strategic fundraising effort in honor of our 50th anniversary. But resources are more than money. HBI as an organization will grow by expanding the capacities of its staff and board, and we will look to attract more neighborhood stakeholders to the cause of preservation through their direct engagement with project planning and investments.

4. To be a good partner. HBI?s partners are resources too, but they deserve special attention because they bring a special ingredient ? good will ? to our work today and, we hope, for many years to come. We built the base of a solid partnership with the North Bennet Street School in 2010 with the ?Handmade Houses? revolving fund for early building preservation in Boston. That will grow this year, but we expect this to be the model for our new engagements with others across many sectors.