Posted at 16:31h in Blog by HBI Administrator
HBI?s Office Manager Gillian Lang follows a fascination with the next door Eliot Burying Ground and discovers more about early Roxbury society through the imagery carved on centuries-old slate gravemarkers there.
August first marks the one year anniversary of HBI?s move to the Eustis Street Fire House. In that time, we have gotten to know our neighbors in Dudley Square, and have frequented all the nearby businesses. We have had veritable tons of Haley House?s delicious ginger slaw, and way too many coconut cookies from Tropical Foods. However, we know comparatively little about our closest next door neighbors, the long time inhabitants of the Eliot Burial Ground. Although, the hundreds of ancient Roxbury residents buried there do not say a lot, their burial stones do. As a result we have had the opportunity, more recently, to learn a little more about who it was that lived in the area that is now Dudley Square.
In 1630 the early settlers of the Massachusetts Bay Colony created seven small villages, among them being Boston and Roxbury. That same year, the Eliot Burial Ground, then referred to as the First Burying Place, was established, making it the oldest burial ground in Roxbury, and one of the three oldest in Boston. It was in active use for over two hundred years, the last interments taking place in the mid 1800s.  Since then the Burial Grounds have served as a valuable tool for understanding the lives of Roxbury?s early inhabitants.
A great deal of study has gone into the careful examination of early Puritan grave markers. This has found links between the images that we see on these early stones, and known societal changes that were occurring. One of the most well known theories was developed by James Deetz and Edwin S. Dethlefsen in 1967, and outlines the evolution of different imagery from ?deaths heads? to ?cherubs? to ?urns and willows?, and can be seen illustrated in the stones of the Eliot Burial Ground.
The first image that we see is the deaths head, which is generally a skeletons head with wings. This image was utilized almost exclusively until the late 1600?s and early 1700?s when it began to be replaced by cherub images. These, in turn were replaced by willow and urn designs starting in the late 1800s. The theory that Deetz and Dethlefsen put forward is that this switch occurred as a result of a move away from Orthodox Puritan ideals. The deaths head image concentrates on the mortality of the deceased, while the cherub is more concerned with resurrection and the afterlife. This represents a fundamental change in the way people were looking at death. It shows a switch from a more guttural, emotional response to a more intellectual one.
This was a change that had already taken place in England. However, the first time we see it in the new world, is in Cambridge. If we can assume that the cherub represents the physical incarnation of this mental shift, it makes sense that it would first make its appearance in Cambridge. As the home of the college, which would become Harvard University, it was always a more liberal and forward thinking place then the rest of the settlements. Deetz and Dethlefson go on to say that in
?When the cherub stones in Cambridge are inspected more closely, we find that roughly 70 per cent of them mark the graves of high status individuals: college presidents, graduates of Harvard, governors and their families, high church officials, and in one case, even a ?Gentleman from London.? From what we know of the innovation in culture, it is often the more cosmopolitan, urban stratum of society that brings in new ideas, to be followed later by the folk stratum?.
It took time for the cherub design to reach out beyond the small borders of what was then Boston and Cambridge. Deetz and Dethlefsen estimate that the pattern dispersed from these centers at a rate of a mile a year.
With this in mind, I took to the Eliot Burial Ground to see if the stones next door to us aligned with this theory. In my informal perusal of the graveyard, I found that it served as a perfect illustration. Primarily the cherub stones that I was seeing were from the 1770s through1790s. However, the earliest stone that I found dated to 1712. At just one mile from the outer edge of what was the Shawmut peninsula, Roxbury would have been quick to experience the change in ideology. In contrast to this, 14 miles west in Concord, we do not see a cherub carving until the 1730s. It seems that the Eliot Burial Ground follows with the time scheme that Deetz and Dethlevson lay out in their study. It also implies that Roxbury was early in following this new trend in liberal thinking. So, perhaps the Roxbury of yore, like the Roxbury of today, was a forward thinking place, where new ideas were being tested and old ways were being questioned. With this in mind, we are able to paint a clearer picture of what these early Roxbury settlers were like, and how they may have affected the modern city that we are experiencing today. 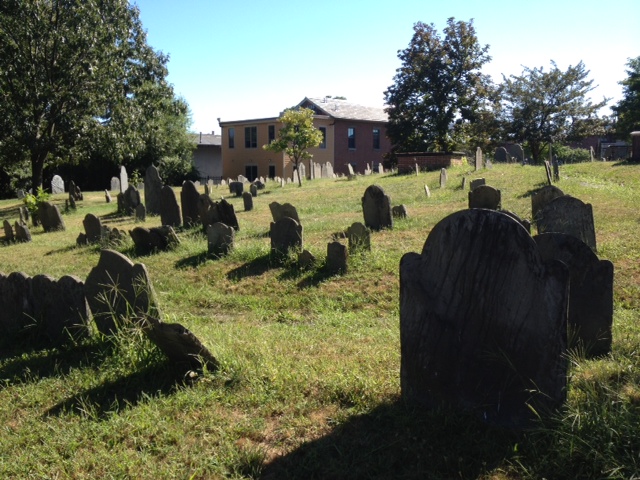