Posted at 17:12h in Blog by HBI Administrator 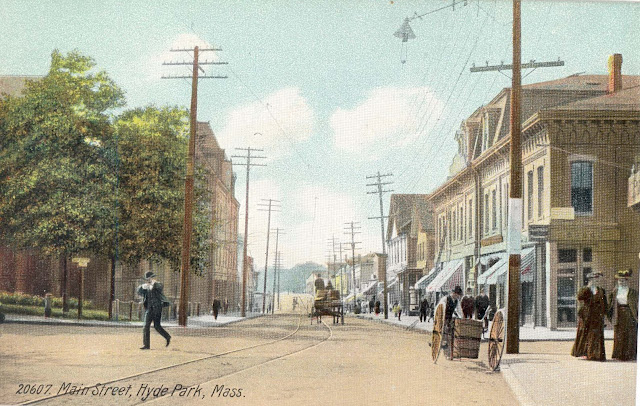 On January 12th, the Boston Redevelopment Authority voted to approve a new zoning article for Hyde Park, acting on recommendations put forth in a Strategic Plan created over a period of more than two years. The process was led by BRA planners and a consultant team headed by Crosby, Schlesinger, Smallridge and which included also HBI. A neighborhood advisory group led the initiative on the neighborhood?s side, through a series of several community meetings and presentations.
As Boston.com reporter Jeremy Fox notes in his recent story on the process, it was not without controversy, and a certain amount of disagreement surfaced from within the neighborhood, particularly around the issue of increasing the allowable density and building heights in the primary commercial districts of Cleary and Logan Squares.
One thing that was not controversial, however, was the idea that the neighborhood?s historic resources should be adequately surveyed and protected. Part of HBI?s job on the consultant team was to make recommendations of specific properties and areas that would benefit from additional study by the Boston Landmarks Commission, as well as areas that should be designated as ?Neighborhood Design Overlay Districts,? or NDODs. In these districts, changes proposed to the exterior of the buildings that would substantially alter their design or exterior appearance would need to be reviewed and approved by a BRA staff architect.
During HBI?s initial survey work in the neighborhood in early 2008, just after Cleary and Logan Squares were designated as an HBI Historic Neighborhood Centers district, we were surprised to learn that not only was Hyde Park one of the last neighborhoods in Boston to have its zoning updated, but that the last time its historic resources were surveyed by the Boston Landmarks Commission was in 1979, leading to a Survey Report being issued in 1980.
A lot can change in 30 years, not only in terms of the physical condition of buildings, which might be highly altered or even torn down, but in the types, ages, and styles of buildings that preservationists identify as important and worthy of preservation. For example, in the 1980 BLC report, many historic houses and a handful of historic churches were recognized and described in the survey, but very little of Cleary and Logan Square?s wonderful commercial and civic architecture was thought worthy of description, let alone pro-active preservation.

These days, preservationists tend to include a wider range of types and eras of buildings on the list of what they find worthy of preservation. In fact, HBI recommended that the entire area of Cleary and Logan Squares that falls within the boundaries of the existing Hyde Park Main Streets district be designated as an NDOD?a recommendation that was adopted in the Strategic Plan. This means that historic buildings in this area?such as the former Burnes Brothers Department Store and the Fallon Block in Cleary Square, or the Way Building, the Everett Square Theatre Block, the former French?s Opera House, and the Vertullo Building (recently acquired by HBI) in Logan Square, to name a few?now have a certain level of protection, in that changes to them, or to buildings nearby that might impact them, will now be reviewed by the BRA. 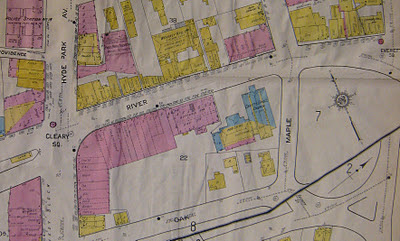 Piecing Together Hyde Park?s History to Help Shape Its Future
A fascinating project that HBI undertook as part of this survey and planning process was to carefully organize slide shows of historic images and modern day photos to demonstrate how much the district has changed over the last 100 years. Historic photos and maps that HBI found in the collection of the Hyde Park Historical Society and digitally scanned reveal that the district was quite densely developed with two-, three-, and four-story buildings by the 1930s. 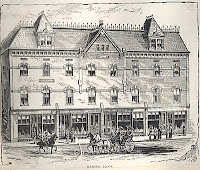 After the 1930s?perhaps as a result of suburbanizing forces felt particularly strongly in Hyde Park due to its location at the southernmost tip of Boston, more or less surrounded by the less densely developed and auto-friendly towns of Dedham and Milton?many of the taller buildings suffered from the removal of their upper floors, or were torn down altogether and replaced by single story structures, or even surface parking lots in some cases. What HBI?s presentation demonstrates is that, in the era when Cleary and Logan Squares were functioning most successfully as a viable commercial district, it was denser and home to many more tall buildings than it has today. 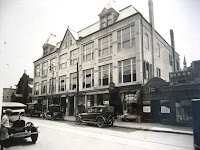 It was quite striking to reveal that the existing, mainly low-rise district with which most people are familiar today is a fairly recent phenomenon. This also represents an interesting case of where historic data could be used in support of new development and increased density, instead of in opposition to it. 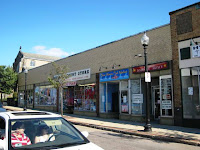 In the BRA planning process, a subset of the community seemed to advocate amending the zoning to accommodate taller and denser development, with the idea that this increase in the number of people living, working, and shopping in the Squares would support their revitalization. Another group worried that more density and residents would bring more traffic and congestion, and contribute to the district?s decline. In the end, the zoning will not change radically, although the BRA would not agree to restrict the number of stories for new structures, instead limiting their height to 40 feet in both Squares.
In addition to the commercial districts, HBI undertook windshield surveys of the residential areas recommended for preservation in the 1980 survey. As a result, HBI not only determined that these areas remain historically significant, but recommended enlarging the boundaries of most of these areas, which include Fairmount Hill, ?Haleyville? and Webster Square, and the Child Street/Sunnyside area. In addition, HBI recommended including Mt. Neponset, a residential area not called out in the 1980 survey report, but a remarkably intact enclave of houses dating from the 1860s through about 1900. All of these areas will now be NDODs.
Eventually, a new and thorough study of all of Hyde Park to identify and describe its historic buildings and places should be completed. In the meantime, HBI hopes that its input into the zoning code updates will help to preserve important parts of Hyde Park?s past for future generations while supporting the neighborhood?s economic revitalization.