You say Vertullo, I say Bonney-Keith Block, Let?s Fix the Whole Thing Up?

Posted at 12:43h in Blog by HBI Administrator

On August 31, 2012, Historic Boston submitted an application to the Massachusetts Historical Commission for an allocation of Historic Rehabilitation Tax Credits to help subsidize the comprehensive rehab of the building at 74-84 Fairmount Avenue in Hyde Park. This was the culmination of almost a year?s worth of research and planning, following HBI?s purchase of the building in late September of 2011. Along the way, we uncovered many interesting and unexpected things about the building. More importantly, we learned how assembling this knowledge?both historic and physical?into a coherent story  not only sheds light on community history and guides a historically sensitive rehab, but can become a powerful tool to build a case for critical tax credit support. This is the first in a series of two posts that describes some of what we uncovered, and how this relates to planning for and funding the rehabilitation of this important building.
Part I:  What?s in a name? 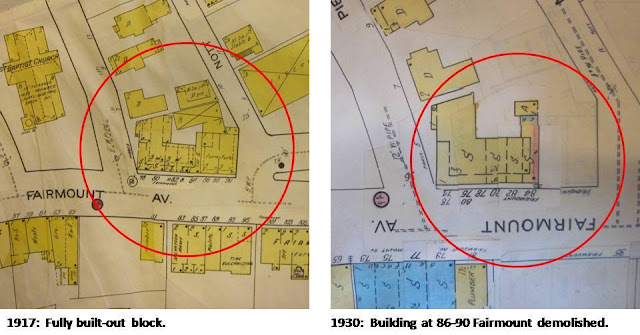 Around the office, we refer to 74-84 Fairmount either by its street address or as ?The Vertullo Building,? in honor of Pasquale Vertullo (pictured here) who bought the property in 1932 and from whose daughters?Carmela Vertullo Pearce and Joanne Vertullo Palie?HBI bought the building last year.

The Vertullo family was a good steward of the property, and the fact that they ran family businesses there and lived above the shop since the early 1930s is largely responsible for the building?s survival.  Many of Hyde Park?s early wooden commercial buildings were of the same age and style as this structure, but most were either replaced by masonry structures as the town grew and prospered in the late 19th and early 20th centuries, while others were taken down in the mid 20th century during a wave of demolition and de-densification that took place as the district succumbed to pressures of the larger trend in suburbanizing shopping.

When we began research to determine the building?s more formal historic and architectural value, preservation consultant Leslie Donovan of Tremont Preservation Services determined two facts that led to a new name being coined for the building. The first was that in 1867-1868, Hyde Park grocer William A. Bonney bought the land in the center of the block and developed and occupied the earliest part of the structure. Second, in 1882, Louisa Keith purchased land on the corner of Fairmount Avenue and Pierce Street and constructed a new section of the building, seamlessly integrating a portion of it into the Fairmount Avenue fa?ade. So, by the standard convention of naming buildings after owners who originally built or expanded them, Leslie Donovan proposed the building be formally called the ?Bonney-Keith Block,? using the surnames of the two original builders.

While this is the formal name that will appear on all official documents with the Massachusetts Historical Commission and other entities, it is likely that the informal name of the Vertullo Building will persist here at HBI, given our close connection with Carmela Vertullo Pearce (pictured here with a photo of her father, Pasquale), who continues to live in an upper floor apartment.
Next up:  How detective work in historic archives and on the building itself provided clues on restoring its lost architectural character.