Posted at 12:07h in Blog by HBI Administrator 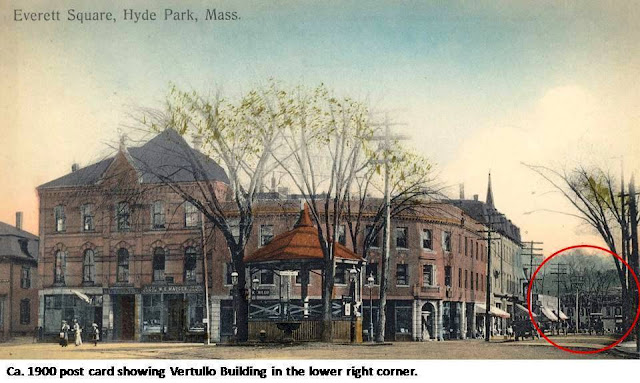 Earlier this week we began a two-part blog post series focusing on the many interesting and unexpected things we discovered about the Vertullo Building in planning for its rehabilitation. Assembling this knowledge?both historic and physical?into a coherent story  not only sheds light on community history and guides a historically sensitive rehab, but can become a powerful tool to build a case for critical tax credit support. This second and final post describes some of the physical evidence that we glimpsed in historic images of the building and that we uncovered on the building itself, which we are using to guide the restoration of the building?s architectural character.
Part II:  Check out all those dentils?
Because it is an important part of any project HBI undertakes, and is definitely critical in projects that hope to use historic rehabilitation tax credits, HBI had to determine how the building at 74-84 Fairmount Avenue has changed over time, and we needed to find clues that would guide our rehabilitation. 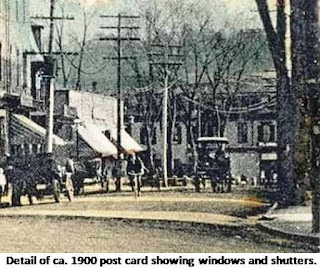 From the start, just from its current appearance, we know that the building is now lacking some of its original architectural detail. We can tell, for example, that the cedar shake siding is not from the 1860s or 1870s and appears to be covering older siding and trim, that the windows have been replaced, and that the storefronts have been significantly altered (mostly by reducing the amount of display window glass they originally contained). While the changes themselves are often readily apparent, deciding what original conditions they replace requires a bit of detective work.
First, we looked for historic images showing the building in earlier times, prior to its modification. We were lucky to find a hand-colored post card from about 1900 in the collection of the Hyde Park Historical Society that shows the building in the background. From this, we could see a portion of the north elevation, and could clearly make out that the storefront at 74 Fairmount originally wrapped around the corner of the building; we were also able to see that the upper floor windows featured two-over-two window sash, and sported handsome shutters.

In a 1965 snapshot that we found in the collection of the Bostonian Society, we were able to see a great overall view and more details of the storefronts prior to their alteration. However, by this time the cedar shingling was in place on the upper floor walls, although the two over two windows were still present, minus their shutters. Finally, a ca. 1954 snapshot from former owner Carmela Pearce of her son Brian and his cousin on tricycles in front of the building provides a close-up view of some of the storefronts at that time.

Next, we began peeling off layers of the building to see what is underneath. On the second floor south elevation, we removed the cedar shake siding and found original clapboards, corner trim, and a tall frieze with evidence of decorative paired brackets. 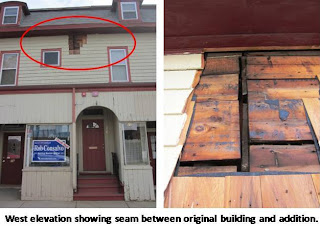 On the west elevation, we uncovered the place where the later portion of the building constructed by Louisa Keith in the 1870s joined the original ca. 1867 portion. On this side of the building, the original clapboards and trim had been totally removed prior to the installation of the cedar shakes exposing the sheathing. Looking at the exposed sheathing, a clear vertical seam is apparent between the older and newer portions of the structure. A portion of what was the original exterior wall of the north elevation of the 1867 building is also visible in the basement, with its clapboards still in place.
Finally, we removed portions of the kneewall of two storefronts, revealing the original lower kneewall and skirting, which, surprisingly, contained short, multi-pane window sash at the basement level. 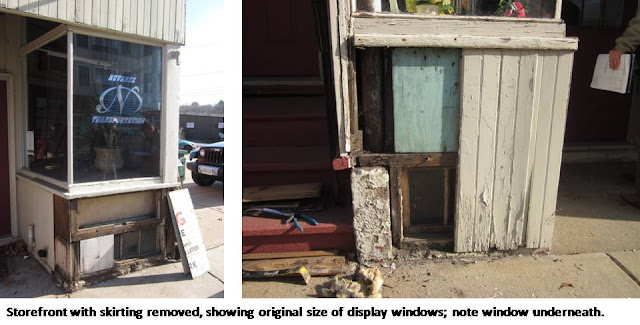 A bit of a red herring turned up on both the south and north elevations of the buildings, which caused initial excitement, and then confusion.  On the south side, we uncovered a trim band at the top of the frieze that showed evidence of dentil molding, a not-uncommon detail on other buildings of a similar style in the neighborhood. When we uncovered the corresponding frieze on the north side of the building, we found not one but THREE trim pieces, stacked one over the other, with evidence of dentils. This turned out not to be a particularly elaborate example of architectural ornamentation, but scrap trim that had been nailed in place to even out the wall surface prior to installing the cedar shingles.

The source of these second-hand boards is unknown, but we have found similar examples of the reuse of old lumber elsewhere on the building (including cut up, hand-painted wooden signs to cover up the windows on the storefront kneewalls). We have affectionately begun to call these ?Patsy Specials,? as former owner Carmela Pearce has told us many times how her father Pasquale ?Patsy? Vertullo was not only frugal but handy?often undertaking repairs and improvements to the building himself and sometimes using recycled or scavenged materials.
At any rate, the information we have uncovered has informed our design for the rehabilitation, and we plan to restore or add back many of these covered or lost details back to the building. The drawing below shows the Fairmount Avenue fa?ade as rehabbed. We believe that this makes a strong statement that not only thoughtfully reflects the building?s original architectural character, but will create an attractive location where small businesses can flourish and where people will be proud to live. 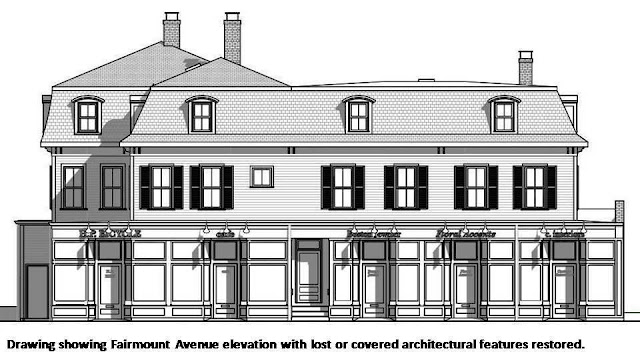