Posted at 09:21h in Blog by HBI Administrator
When thoughtfully applied, $1 million can go a long way toward restoring and preserving valuable histroic resources. The National Trust’s Partners in Preservation will showcase just how much was done through a 2009 grant program during a special Open House on September 17th. Erin Doherty, who has been working with the group, explains more in this guest post. Doherty is entering her second year of Boston University?s Master?s program in historic preservation.

Two years ago, the Partners in Preservation (PiP) program arrived in Greater Boston, ultimately granting $1 million dollars to 25 Greater Boston-area historic sites. As an intern at the Northeast Office of the National Trust for Historic Preservation, I have been working with fourteen of these sites to organize an event inviting the public to see the work completed with their grant money. On September 17, these sites will be opening their doors with free admission to show off their restoration projects and the PiP program?s lasting impact.

In 2009, the PiP competition, a collaboration between the National Trust for Historic Preservation and American Express, set off widespread public enthusiasm for restoring historic places across Greater Boston. Sites rallied for votes in the online voting portion of the competition, vying for first place and $100,000 in restoration funds. After the grants were awarded, however, it quickly became evident to the historic places involved that the effects of the program were far greater than any sum of money that could be awarded. The visibility that the program provided attracted not only additional dollars in donations but also a huge upswing in community support and changed attitudes toward preservation.

This summer, I have been amazed at the dedication of the people working at these sites, and at their incredible successes. Not only did these communities work hard to earn votes, plan preservation projects, and implement sometimes overwhelming restoration work, but since the grant program, they have continued to work together to raise visibility for preservation in Greater Boston. At my first meeting with representatives of the group, I was impressed by their plans to continue working together as a collaborative in the future. This summer they have been working together to create a mission statement, set up a structure, and to define goals for their new organization.
Following this first meeting, I learned much more about the history of these organizations, whose diversity is astounding. From the tiny Vilna Shul on Beacon Hill to the expansive landscape of Mount Auburn Cemetery, the impact of PiP on these sites and in turn the sites? impact on their community was remarkable, to say the least.
In Framingham, after the Partners in Preservation grant funded the restoration of the Edgell Memorial Library?s Gothic Revival-style windows, the town voted to appropriate nearly $1 million toward preservation in the town, and placed preservation restrictions on three historic buildings. Through their active involvement in the Partners program, the Library was truly able to transform public opinion toward preservation, exposing it as the attainable reality we in the field know it is. In Quincy, at United First Parish Church, home to the crypts of John Adams and John Quincy Adams, the congregation raised a total of $600,000 for the restoration of their bell tower, toward which PiP contributed $80,000. The congregation paid $300,000 out of their own pockets for the project. I was moved nearly to tears when visiting the Church for their start of restoration ceremony in late July (and unknowingly landed myself in a front page photo in the Quincy Sun!) 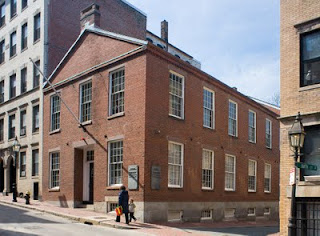 I think the National Trust for Historic Preservation?s President Stephanie Meeks said is best when she said of PiP and the Open House Day: ?What makes Partners in Preservation such a powerful program is the fact that it is driven by community support?This is a rare opportunity to see how the grants they voted for have helped to secure a future for these local historic treasures.? This program has inspired me to diligently continue my own studies and work in the field of preservation. I am excited to invite all of you to the Open House Day on September 17, where you can visit 14 of the original PiP Greater Boston sites and see for yourself how these local historic treasures are thriving. For more information on the sites and to see suggested itineraries for the day, visit our website.