March 27, 2020 Historic Places in your Neighborhood to Spot on a Walk (Social Distancing Friendly)

Posted at 13:26h in Blog by Historic Boston Inc

Spice up your next stroll around your neighborhood with some historic sites. Don’t feel like venturing out? Talk a virtual tour by following along with the images and links below. Tell us what other historic sites you see on your walk on Facebook, Instagram, Twitter. Remember to maintain a distance from others when you venture out click here. With those guidelines in mind, here’s an idea for a route, click here!

Start at the Eustis Street Firehouse The oldest remaining fire house structure in Boston, the 1859 Eustis Street Fire House became HBI’s headquarters in 2011. This building was used first for a hand-pulled fire apparatus; later, after Roxbury merged with the City of Boston, a stable was added to the back of the building for horses that were used to pull hook and ladder equipment. It later served as a Spanish American War Veteran post.

Head down the street to the Eliot Burial Ground Walk down Washington Street to the Bruce C. Bolling Building During the early 20th century, Ferdinand’s location next to the newly-minted Nubian Square, one of the largest bus stations in Boston, lead to its great success, in part to its proximity to the train line, but by the 1970s the business had closed. In 1987, the elevated line was decommissioned and taken out of service. The building was vacant for decades until its rehabilitation in 2015. Today, the Bolling building is home to Boston Public School administrative departments, and includes a green roof, state-of-the-art office space, retail, civic spaces, and community meeting space.

Stroll up the hill to Roxbury Heritage State Park The Roxbury Heritage State Park is home to the c1750 Dillaway-Thomas House, one of the oldest structures in Roxbury. This building served as the headquarters of the Continental Army in 1775 during the Siege of Boston. The house is now a museum with exhibits of Roxbury’s past and present history. Landscaped grounds also provide visitors with an excellent view of Boston’s skyline.

Spot one of Boston’s Stone Markers From the Bay State Banner: “Perhaps the most famous of the stone mile markers, known as The Parting Stone in John Eliot Square, stood at the intersection of roads leading to Rhode Island via Dedham, Western Massachusetts via Cambridge and Boston. Erected in 1744, the stone originally featured an iron post on which lamps could be hung. It now stands at the intersection of Roxbury, Dudley and Centre streets. Nearby on Centre Street is a three-mile marker, also bearing Dudley’s name.

In addition to marking mileage to Boston, The Parting Stone marked the departure point for stagecoaches heading for Boston from Roxbury. In those days, John Eliot Square served as a town square for Roxbury. The First Church of Roxbury and the Norfolk House Inn were important institutions in the town. When Roxbury joined Boston in 1868, the R was altered to a B. Spot one in John Eliot Square, at the corner of Roxbury Street and Centre Street.”

Stroll down to the Alvah Kittredge House Built for Roxbury alderman and Eliot Church deacon Alvah Kittredge (1798-1876), the Kittredge House is one of a handful of high style Greek Revival period wood frame houses remaining in Boston. Originally positioned in the center of a large rural estate, the Kittredge House was also once home to prominent 19th century Boston architect Nathaniel Bradlee. In the 1970s and 80s, it was home to the African American advancement organization Roxbury Action Program (RAP). The house was vacant from 1991-2011. 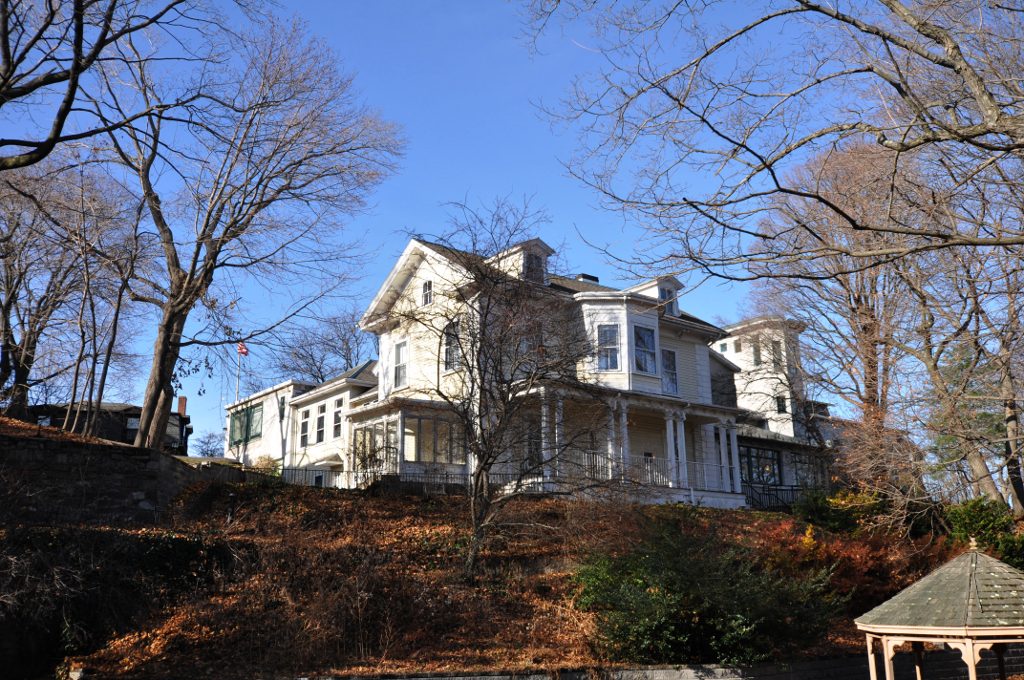 Located in the hilly Roxbury Highlands neighborhood, this former residential property is now part of the Emmanuel College campus. Perched along a ridge, with views of downtown Boston, the two-story Italianate house (1844) was the residence of newspaper editor and abolitionist William Lloyd Garrison from 1864 until his death in 1879. The 1.65-acre campus faces Highland Park Street but is set back by both distance and elevation. The church at 50 Cedar Street has been an icon in the Highland Park neighborhood since its construction on the corner of Cedar Street and Hawthorne Street in 1910. The 8000 square-foot wood frame building was designed by Bostonian architect Edward T. P. Graham, and was originally built for a Norwegian Evangelical congregation. In 1955, the church changed hands to the African Orthodox Church as the area became a concentrated center for African American residents. The neighborhood and church provided the perfect environment for the growing African Orthodox congregation, an off-shoot of Marcus Garvey’s Universal Negro Improvement Association (UNIA ).

From the Boston Preservation Alliance: “The iconic Fort Hill Tower overlooks Roxbury from the top of historic Highland Park, the location of a strategic fort during the American Revolution. Originally designed in 1869 by Nathaniel Bradlee and called the Cochituate Standpipe, the Gothic Revival style tower stored water from Lake Cochituate in Natick for local residents. Soon obsolete as a water tower when Roxbury was annexed by Boston, the structure and grounds fell into disrepair. Between 1895 and 1916 the firm of Olmsted, Olmsted, and Eliot made improvements to the property, including the addition of an exterior viewing balcony and the reconstruction of the quadrangular shape of the original fort. In 2013, an extensive restoration effort was undertaken by the City of Boston. Russo Barr Associates, architects, and Building Conservation Associates paid special attention to historically appropriate methods and materials.”